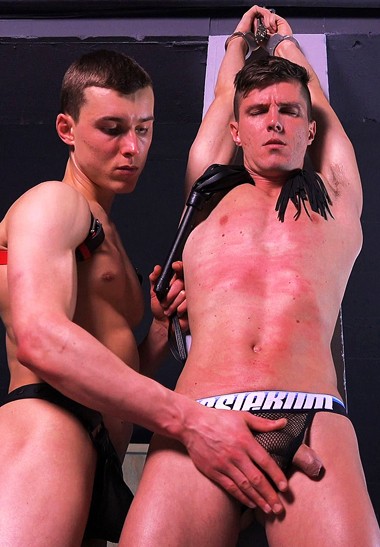 It’s two years later and Chris and Reese have been inspired to take over the coaching position when the original coach is no longer in the picture. When Jeremy Walker applies for the position of assistant coach, he’s led through an incredibly physical interview process. Things get really hot as Jeremy is put through his paces by the horny new coaches and made to perform such physical tasks as showing off his incredible body, doing push ups in nothing but a jockstrap, and doing squats that show off his amazing ass. Things get even hotter when Jeremy comes to the realization that he?ll do anything to get this job. Anything at all. Even if it means gobbling a mouthful of cock while getting his ass rammed. The new coaches take full advantage of this eager jock’s tight end and his willingness to please. Not only is this video fucking hot to watch, it’s also really entertaining. The opening sequence is pure genius, and I have to commend Reese and Chris for coming up with all the funny parts on their own. And Jeremy does a great job of playing along. Don’t pass up the beginning just to get to the sex because you’ll be missing out on a lot of fun.

This was only ever released in very-compressed form so I spent some time restoring and upscaling it.

Resolution: 1080p (AI Upscaled from 540P, excellent quality for what it is)

This is a big file of an older video so before-and-after and screenshots are attached so you can make an informed decision before downloading.